It's UKYA Extravaganza, the best kind of extravaganza, and I'm joined on the bookshelf by YA author Martyn Bedford who chats advice for aspiring authors, religion and death by chocolate.

Tell us a bit about yourself.
Usual stuff: I was born in Croydon, south London. I worked as a newspaper journalist before becoming a writer. As well as two (soon to be three) YA novels, I’ve written five for adults. I’ve lived in West Yorkshire for the past 20 years. I teach creative writing at Leeds Trinity University. I’m married to a librarian and we have two teenage daughters.

Not so usual stuff:  From the age of 13 to 18, I refereed more than 200 football matches. I lived in a caravan with two mates when I was a journalism student. During a one-year round-the-world trip, I taught English in Hong Kong for four months. I used to be a Buddhist. I’m one of the judges in the children’s category of this year’s Costa Book Awards.

Was there a particular book that inspired you to start writing?
I used to write stories as a child and in my teens. But the book that really inspired me to become a writer was Jack Kerouac’s classic American novel, On the Road, which I read in my early twenties when I was backpacking across the U.S. I loved his energetic, rhythmic, crazy prose and most of my stuff around that time was an (unsuccessful) attempt to mimic his style.

Who is your favourite author?
Kerouac used to be, but I think it’s best to read him when you’re young. I also went through a Kurt Vonnegut phase – Slaughterhouse Five is one of my all-time top-ten novels. I don’t really have one stand-out favourite author, these days, but I like lots of YA novelists – Mal Peet, Sonya Hartnett, Jan Mark, Patrick Ness, Siobhan Dowd, Kevin Brooks and Jenny Valentine, to name just a few.

Any advice for aspiring authors?
Write as much as you can as regularly as you can. Then rewrite, rewrite, rewrite. And read. A lot. You could also join (or form) a writing group, take creative-writing classes or read how-to books on writing – these things might help. But almost everything you learn about writing will come from just doing it.

If you could have three people over for dinner (alive or dead), who would they be and why?
Jesus could bring the food and drink (loaves, fishes, wine) and resolve the whole son-of-God question once and for all. The Buddha could teach us the path to enlightenment (although I’m worried he might just sit in a corner, meditating, for the whole evening). And I’d invite Germaine Greer, Emmeline Pankhurst, Anne Frank or Boudicca, as well, just so it doesn’t get too blokey. Boudicca, probably – I’ve heard she makes a great tiramisu.

Who’s your favourite character from a book or movie?
Holden Caulfield from The Catcher in the Rye – I love his ‘voice’ and his attitude (messed up though it is). He gets quoted a couple of times in my novel, Never Ending. And when my daughters were younger and I used to read to them, I thought Lauren Child’s sassy character, Clarice Bean, was hilarious.

If you could travel back to any time period, where would it be and why?
I researched England in the Middle Ages for a story I wrote last year and became fascinated with that period, especially the 1300s – the time of Chaucer, the Black Death, the Peasants’ Revolt and Piers Plowman. But I’m not sure I’d survive long if I time-travelled there – if I didn’t die of disease or violence, I’d probably be hung as a heretic!

Somewhere you want to go where you’ve never been before?
I love long-distance walking trails, especially in the mountains. So, New Zealand would be great. Or the Canadian Rockies. I spent two weeks trekking in the Himalayas, in Nepal, and it was one of the best times of my life. Mind you, I was a lot younger and fitter back then.

If you could only eat one food for the rest of your life, what would it be?
Well, death by malnutrition would be inevitable if you only ate one food, whatever it was ... so it might as well be chocolate. At least I’d die with a smile on my face. And spots.

As well as indulging my random questions, Martyn was also good enough to send me copies of two of his novels; Flip and Never Ending (reviews en route in separate posts, or this will be one looooong addition!).

First up is Flip, the story of 14 year old Alex, who wakes up in the wrong bed, in the wrong room, in the wrong house. Not to mention the wrong body. It's a twisty psycho thriller, right down to the trippy cover which had me trying to read the book upside down damn near every time I opened it! 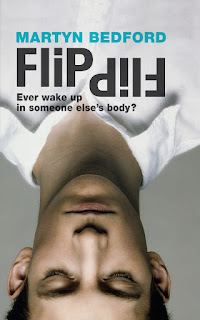 Author intro - Flip
The idea for Flip lodged in the recesses of my mind when I was about fourteen. Not that I knew it at the time. I didn’t like myself very much back then. I often wondered what it would be like to be someone else. Someone better looking than me, more popular, more self-confident, better at sport, more successful with girls. Someone who didn’t have asthma. I used to look in the mirror and wish I was different.

Specifically, I wished I was like my best friend David. At football, he scored all the goals; on school sports day, he won all the races; whenever he walked into a room you could tell by their reaction that boys liked him and girls fancied him. We lived two doors apart and had been friends since we were toddlers – but I didn’t really start envying him until we hit our teens. I distinctly remember thinking: if I could swap bodies with him, I would. Real life didn’t make that possible, of course, but one of the joys of being a writer is you can let your characters experience the things that you aren’t able to.

But it was many years before I put this into a book. David and I lived at opposite ends of the country by then and had long-since drifted apart when, out of the blue, I received an email from him. And all of the memories of our teenage years – my ‘David envy’ period – came flooding back.

The result was Alex, the hero of Flip – a 14-year-old who wakes up one morning in an unfamiliar bedroom. The family at the breakfast table are total strangers. And when he looks in the mirror, another boy’s face stares back. A boy named Philip. With no idea what has happened, or how to switch back again, or who “he” is anymore, Alex finds himself in a deadly race against time to save himself from being trapped forever in the wrong life.

I’m (mostly) happy with who I am, now. But it was great fun – and a little weird – to revisit my youth and, through Alex, find out what it might’ve been like to be someone else.

Next up was Never Ending, a much more hard hitting story of grief, loss and coping with guilt. It's a very different book, one that packs more of an emotional punch but still keeps the twists and turns that I'm beginning to see are embedded in Martyn's storytelling. 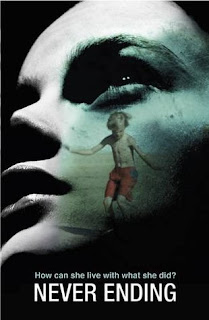 Author intro - Never Ending
If I hadn’t almost wiped out my family in a car crash I might not have written Never Ending.

We were heading on a daytrip – me, my wife and our two daughters – when I overtook a van on a dangerous stretch of road. I’m still not sure how the car coming the other way didn’t hit us head-on. At the speed we were travelling, it’s unlikely anyone would have been pulled from the wreckage alive. For the rest of the day, two versions of events unfolded: the real one, in which we continued our trip (the country walk, the picnic, the ice creams); and the one in my head (the ambulance, the hospital, the morgue). I also had the germ of an idea for a novel. I don’t mean right there and then in the car. It wasn’t as if my wife, white-faced and trembling, turned to me and gasped, “You nearly killed us!” and I replied, “Yeah, but I’ve just had a brilliant idea for my next book!” But, over the following weeks, I pondered the question that is often the starting point for a story: What if? What if my wife and daughters had died and I’d survived? What if I had to live with that loss and grief – and the guilt of having killed the people I love most?

And so Never Ending evolved.

It’s about a 15-year-old girl, Siobhan – or Shiv – who is traumatised by the death of her younger brother Declan on a family holiday. He died because of her and she can’t cope with what she did. So she is sent away to a clinic that claims to ‘cure’ teenagers like her. But it’s no ordinary psychiatric institution and her release from her demons, if it comes at all, will come at a bizarre and terrible cost. The novel is told in alternating strands – the story of how Declan died, and the tale of Shiv’s ordeal at the clinic. Through her, I ventured into a place I’d been lucky to avoid visiting myself. And, perhaps, in making her suffer, I was unconsciously punishing myself for the deadly mistake I almost made on that family outing.